The Department of Mathematics, Al -Ameen College, Edathala celebrated the 134th birth anniversary of Sir Srinivasa Ramanujan on 22.12.2021 in the Seminar Hall. The HOD of mathematics Dr. Vinitha.T, Prof. Soni Sebastian T along with the students of the mathematics department commemorated the day with the programs concluding by 12:30 pm. The anchoring for the day was by student representative Farsana Noushad. The seminar was conducted in a webinar format along with a math magister competition. There was a total of 7 competitors from different colleges registered by google forms.

The program started at 10.00 AM with an invocation song which was followed by a welcome speech by Aminsha P A. The competition started at 11 am via Google meet. The participants like G. Kavya, Kajol Tom, Mehrunnisaismail, Nandana, NiyaRajan, Aleena Benny, P. N. Nefiya respectively gave splendid presentations. The winners were Kajol Tom, BCM College, Kottayam and  G. Kavya, Assumption College, Changanassery. 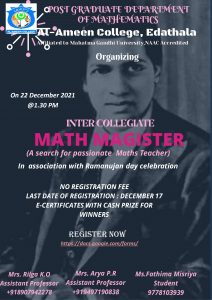 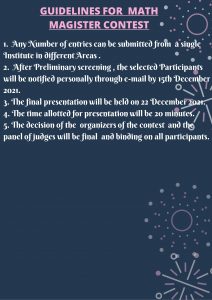