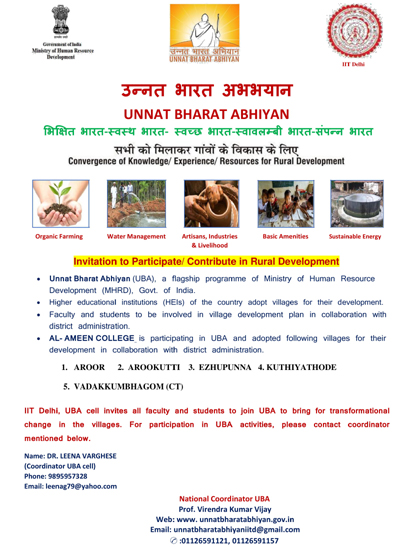 UNNAT BHARAT ABHIYAN (UBA) is a flagship programme of the Ministry of Human Resource Development, with the intension to enrich Rural India. It aims to create a vibrant relationship between the society and the higher education institutes, with the latter providing the knowledge and technology support to improve the livelihoods in rural areas and to upgrade the capabilities of both public and private organizations in the society.
Al – Ameen College, Edathala is a Participating Institution of Unnat Bharat Abhiyan and has adopted five villages – 1. Aroor 2. Aroorkutty 3. Ezhupunna 4. Kuthiyathode 5. Vadakkumbhagom. The institution constituted a team comprising of a general staff co ordinator, along with five individual staff co ordinators for each villages assisted with a team of students representations for Unnat Bharat Abhiyan programme. In the initial phase, the team has conducted the household survey and village survey and has identified the major problems faced by the villagers in the adopted areas.
Even though a wide variety of problems was communicated by the villagers, the more severe problem identified was plastic waste. Addressing this problem, the institution has organized a “Plastic Free Village Camp” on 2nd October, 2019 in these villages and distributed free cloth bags as part of inducing public to use cloth bags instead of plastic bags.

With an intention to participate in the development process of rural areas in the country to achieve sustainable development and better quality of life, Al – Ameen College, Edathala has joined hands with Unnat Bharat Abhiyan a flagship programme launched by MHRD, Government of India. As a participating institution in UBA, the college has adopted five villages under this programme. As a preliminary step, the UBA teacher co-ordinators along with the students has conducted a household survey of all the five villages which were adopted to know the basic demographic profile of the villagers and to identify the basic problems faced by them.

Together with the population growth, the amount of garbage’s also has shown a hike over the years. On the go life styles require easily disposable products, such as soda cans or bottles of water, but the accumulation of these products has led to increasing amounts of plastic pollution around the world. As plastic is composed of major toxic pollutants, it has the potential to cause significant harm to the environment in the form of air, water and land pollution. To address the various problems relating to plastic and its usage, UBA team of Al – Ameen College has organized a “Plastic Free Village Campaign” on 2nd October, 2019 at Al – Ameen Public School, Chandiroor with a motto “ Go Green, no plastic, everything is fantastic”.

The campaign started with a flash mob by the student co ordinators of UBA, Al – Ameen College, Edathala followed by an invited talk by Dr. V. N. Jayachandran (Kerala Sasthra Sahithya Parishath) to create awareness among public and students about hazards of using plastic bags and to induce them to use cloth bags. The programme was inaugurated by Smt. B. Retnamma (President, Aroor Grama Panchayat), and as an initiative cloth bags were freely distributed to encourage its use.

As part of creating an awareness and instilling concept of cloth bags among public, Unnat Bharat Abhiyan , Al-Ameen college, Edathala organized a training session for Kudumbasree members of Aroor Grama Panchayat (ward No. 19) . Aroor Grama Panchayat is one of the adopted villages of Al – Ameen College, under the UBA project. The training session was handled by staff, students of Al – Ameen College along with the hired external expertise wherein the members of Kudumbasree units were provided coaching in making and marketing of cloth bags. The initiative taken by the UBA team was mainly intended to empower the Kudumbashree members of the panchayath in starting a new venture in stiching and marketing of cloth bags. Thirty five members of Kudumbasree unit participated in the event and have positively responded towards the concept whole heartedly.

Unnath Bharath Abiyan, Al Ameen College in association with Department of Biotechnology organised a one day training programme – clean hands- saves life’s (A covid19 preventive initiative) for kudumbasree units in ezhupunna panchayath, Alappuzha District on 15th October 2020. The inauguration of the training program was performed by the ICDS chairman. She shared her thoughts by delivering an insightful speech. In her speech she emphasized the importance of making sanitizers which stands as an important priority in the current pandemic situation. The program was then felicitated by UBA, Al Ameen college coordinator Dr. Hakeem Al Ferose , Assistant professor. Around 23 representatives of selected kudumbasree units of the panchayath attended the training. Ms. Rahimol Ramesh ,HOD, Assistant professor ,department of Biotechnology, Al Ameen College delivered a detailed explanation of sanitizer manufacturing process and the precaution to be taken while  processing it . Ms. Rahimol Ramesh along with Ms. Alphy Nisa Steaphen , Assistant professor department of Biotechnology, and  Mr.Safeer Ummer technical assistant , Al Ameen College gave live demonstration on different types of sanitizer(ethanol and Isopropanol based). Under the guidance of these faculty members, a hands on training program was organized for all the members present in the gathering. The 23 trainees were then divided into 4 units and they promised to start the manufacturing division from the same.

The Entrepreneurial Development club in association with Unnath Bharath Abhiyan has organized an orientation programme for the students on the topic “Social entrepreneurship- Swatcchta and Rural Engagement” on 19th October 2020 from 10.30 AM to 11.30 AM.

At the end of the presentation, there was a Q&A session, in which the participants asked their doubts, which helped them to enrich their knowledge about the topic. A total of 108 students from all the departments, attended the webinar. It was coordinated by Ms. Ashina Z, ED Club Member and the vote of thanks was delivered by Ms. Deepthi Serene Jose, ED Club coordinator. It was a very informative session indeed, with wide acceptance from the participants.