The session was taken over by Mr. Sejo John. He addressed the students and briefed them about music and its various aspects. He talked about the various stages of his musical journey, which finally transformed him into a film music composer. He shared his experiences in the film industry and his various associations with other artists and musicians. There was an interactive Q&A session with Mr. Sejo, where the students asked their doubts and various other questions related to music and film industry. Mr. Sejo enquired students about their future plan, and motivated them to pursue their dreams. It was really an inspirational and motivational session. He also ensured his whole-hearted support in their musical career ahead.

The programme concluded with a vote of thanks by Mr. Davin C Mathew. 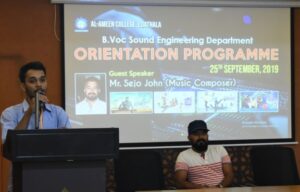 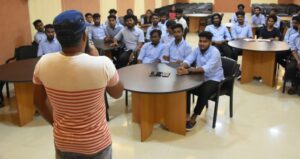 About the Author: admin

Admission Help Desk-7012690103
PG CAP 2021-22 Admission Started
National Assessment and Accreditation Council (NAAC) has accredited our College at \"A\" Grade with a CGPA of 3.15 out of 4 on a seven point scale.