The session began with an introduction to film history, and various methods and equipments in early film industry by Manoj Venugopal (Master class faculty) who is a veteran in film sound designing. Later on, various recording methods and equipments which are used in current film industry was introduced to the students by Arun Rama Varma. He explained the working and specifications of various mics and recorders used in the sync sound. Also, he shared his industrial experience to students and various scenarios in which he creatively placed microphones and recording gear to capture sounds.The session concluded with a vote of thanks by BVoc Department Faculty Christopher VM. 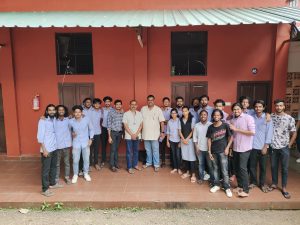 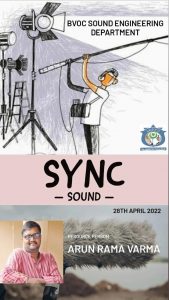 Admission 2022-23
Admission Help Desk
Applications are invited for Admission to B.Voc Sound Engineering 2022-2025 Batch.
UG & PG Admission 2022-23
All are requested to pin the flag on the website http://harghartiranga.com based on their geographical locations and download the certificate.
Admission Help Desk:6282703969
Placement Highlights 2021-2022
Grievance Redressal Portal
Applications are invited for the post of System Administrator
Go to Top