Department of Sound Engineering conducted a workshop on the topic ‘Sound Design and Surround Sound’ by audio engineer Mr. Arun Rama Varma. The seminar was conducted on 27th July 2022. Arun Rama Varma is a senior audio engineer of Indian Movie Industry who has worked in over more than 100 movies, and his session was very enlightening to the students.

The workshop started off with an introduction to the history of film and the various methods and equipment used in the early film industry.  Later on, various recording methods and equipment which are used in current film industry was introduced to the students. Arun Rama Varma explained the working and specifications of various mics and recorders used in the industry. Also, he shared his industrial experience to students and various scenarios in which he creatively placed microphones and recording gear to capture sounds and had done a practical session regarding sound design and surround sound. It was an interesting and inspiring session for the students, and also a golden opportunity to interact with a senior audio engineer.

The session concluded with a vote of thanks by B.Voc. Department Faculty Christopher VM. 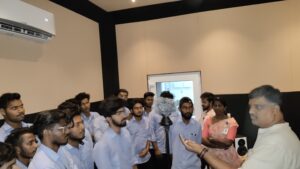 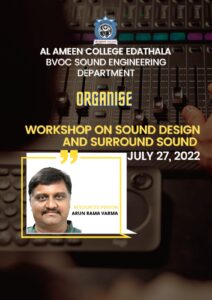