Flutter is an open-source UI software development kit created by Google. It is used to develop cross platform applications for Android, iOS, Linux, macOS, Windows, Google Fuchsia, and the web from a single codebase. Flutter apps are written in the Dart language and make use of many of the language’s more advanced features.

In order to develop prototype, a Workshop on Flutter was organised from 24th May to 25th May by IIC of Al-Ameen College, Edathala. Jino Manoj John, student representative gave the welcome speech and introduced the Mentor. Dr. Kala N, President of IIC Al-Ameen gave the inaugural speech and encouraged the students to take advantage of this opportunity. Mr. Arun Paul Varghese, Software Developer at Macbee Innovations, Bengaluru was the mentor for this workshop. The Workshop was attended by 50 students from various departments. It was conducted at the Computer Lab using Android Studio application and Flutter SDK (Software Development Kit) on state-of-the-art computers.

The first day was an introduction to programming and logic building. It consisted of introductions to the Dart programming language and the becoming familiar with the Android Studio software. The following day students were tasked with replicating the WhatsApp application UI (User Interface). At the end of the session every student was able to replicate the UI. The Workshop concluded with a vote of thanks from Visakh S. Nair, Student Coordinator IIC Al-Ameen thanking the mentor and the attendees for their support followed by a thank you note from Mr. Arun Paul Varghese. 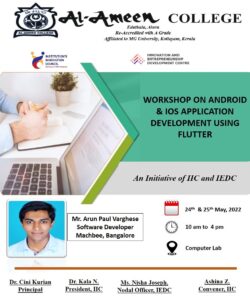 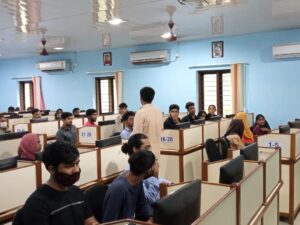