The programme started at 2 pm. with an inauguration ceremony. The programme was inaugurated by College Principal Dr. Cini Kurian, The programme coordinator was Chitramany V and the student co-ordinator was Aseera AS, Student of II B.Sc. Physics.  Head of the Department Hiba Rahman E welcomed the resource person Dr Manesh Michael, Asssistant Professor, Department of Physics, Bharata Mata College, Thrikkaka to the session. Dr Manesh opened the windows to the Universe by taking the students through a talk on ‘How Einstein’s space-time ripples reveal the secrets of the universe’

He offered a detailed overview of the basics of Astronomy and Astrophysics, and Einstein’s theory of Relativity. He also discussed about Einstein’s prediction of Gravitational waves and its discovery.

The programme concluded with a fruitful Q&A session followed by vote of thanks proposed by Ms.Aseera A S student of II B.Sc. Physics. 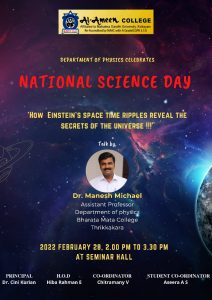 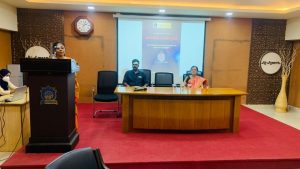 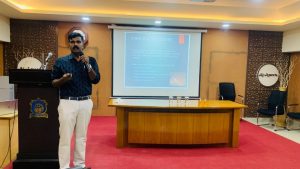