Hands on session with Bijibal

Home » Hands on session with Bijibal
Previous Next

Hands on session with Bijibal

Department of Sound Engineering conducted a Hands on session with Bijibal. The seminar was conducted on 8th April 2022.Bijibal is an Indian composer of Malayalam language films, documentaries, short films and television commercials. He is also a playback singer. He has composed more than 150 feature films and several documentaries and television commercials and his session was very enlightening to the students.

The event started off at 2 pm. Mr. Salman Koroth, III year B.Voc Sound Engineering student welcomed the honored guest and students to the programme by a music performance.

Mr. Nandu R, HOD, delivered the welcome speech and also introduced the guest Mr. Bijibal to the students, mentioning his contributions to the film industry. Bijibal addressed the students and briefed them about music composing and its various aspects. He talked about the various stages of his musical journey, which finally transformed him into a film music composer. He shared his experiences in the film industry and his various associations with other artists and musicians. There was an interactive Q&A session with Mr. Bijibal, where the students asked their doubts and various other questions related to music and film industry. Students requested Mr.Bijibal to sing one of his own film song composition, and they were all thrilled when he rendered the song ‘Manikya Chirakulla’ from the Malayalam movie ‘Idukki Gold’ in his own voice! It was really an inspirational and motivational session. He also ensured his whole-hearted support in their musical career ahead. The programme concluded with a vote of thanks by Mrs. Remya K Prabha. 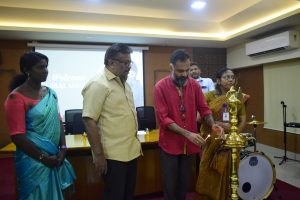 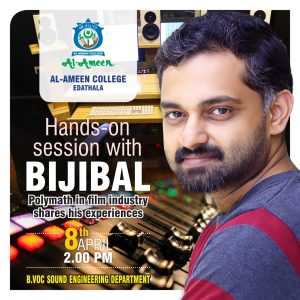 Placement Highlights 2021-2022
Admission Help Desk
Grievance Redressal Portal
All are requested to pin the flag on the website http://harghartiranga.com based on their geographical locations and download the certificate.
Applications are invited for Admission to B.Voc Sound Engineering 2022-2025 Batch.
UG & PG Admission 2022-23
Admission 2022-23
Admission Help Desk:6282703969
Applications are invited for the post of System Administrator
Go to Top