The Biotechnology department association of Al-Ameen College, Edathala was conducted on 4th March 2020 and the gathering was named as REBETRON 2020.

The inaugural ceremony began at around 11 am seeking the blessings of the lord almighty by Parvathy Prasad , first year B.Sc.Biotechnology. Ms.Rahimol Ramesh,HOD of the department extended her warm welcome to everyone present in the gathering.Prof. M B Sasidharan, College principal presided over the function . He commented that the Biotechnology department as the model department for the entire college. Dr.Cini Kurian, IQAC Coordinator and Ms.Thasny faisal , coordinator of the program extended the felicitation.

The major attraction of the event was the release of the short film ’THAKKEETH’ developed by the students of the department.Prof.M B Sasidharan released the short film during the event.

The following session of the event was to honor promising students of the department for their various achievements. Neema Jose of second year B.Sc. Biotechnology was bestowed award as the star of excellence. Mr.Ravisankar, final year B.Sc. Biotechnology was selected as the best director. Ms.MalavikaR was awarded as the best outgoing student in the academic year 2018-19. Kalaprathibha awards were given to Mr.Hrishikesh Sarosh for his performance during the Arts fest’ PRALAYAM 2K19’ and to Athul Raj C T for the performance in the Arts fest ‘ARTICLE 14 2020’.Excellence in sports was awarded to Rajalakshmi K V.Hashim Hassan and Muhammed Zalman T M, winners of kolkali and duff mutt in university kalolsavam were also presented with awards.

The afternoon session began at 2:30 Pm followed by various cultural programs of the students. 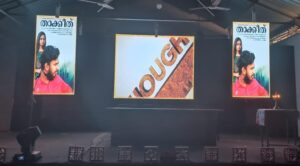